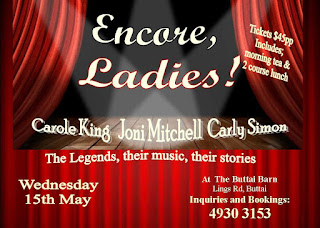 Carole Joni Carly: The songwriters who changed the world

Wednesday May 15 2019 at  The Buttai Barn, Lings Road Buttai
- the music and the stories of these 3 extraordinary women who drove a revolution into the 70's and created a soundtrack to our lives. Carole King, Joni Mitchell, Carly Simon are legends in our lifetime and for those who grew up in this era, their songs will trigger a lifetime of memories.  What were you doing when you heard Both Sides Now for the first time?   Who do you think of when you hear You've Got A Friend ? And who does You're so Vain remind you of? BOOKINGS  4930 3153  Tickets include morning tea and 2 course lunch.
. . . . . . . .


Crazy: The Life and Music of Patsy Cline

The diva of American Country music, Patsy Cline was known and loved worldwide.  She is now considered the most influential, successful, and acclaimed female vocalist of the 20th Century.  Her life was tragically cut short at the age of 30 but her music immortalised her and although she was defined as ‘country’, her songs had a broad audience appeal and have been covered by artists across many genre’s.

One of her most popular hits - “Crazy” - inspired the title of this show as we explore her life in an entertaining journey of song and story. We’ll meet some of the artists who influenced her and some who SHE influenced and who later became stars.  Songs will include many of her well-known hits such as Crazy and Walking After Midnight  as well as a few of her lesser-rating but still popular recordings.

Diva Fever is a a nostalgic look at the female vocalists of the 1950's - an era where boy-bands and male singers were 'flavour of the decade', and female artists had to be stand-outs to top the charts.  They were, and they did! You'll hear the songs and stories from artists such as Julie London, Eartha Kitt, Peggy Lee, Etta James, Connie Francis, Blossom Dearie and many more.
This show had its first run at The Buttai Barn in 2014, with an encore season booked at the same venue for May in 2015.  Another encore season has been booked again by the Barn and  I'm delighted to have the support of talented young musicians Peter Farrell on guitar and Heath Parker on Double Bass join me for this show.
AT:  The Buttai Barn  13 + 14 June  Tix $43 book direc on 0249 303 153

This outstandingly successful show is BACK!!   For ONE SHOW ONLY -  at The Dungeon, Adamstown  Sunday 22nd May 2pm  Tickets:  $23pp at the door {includes afternoon tea}
One doesn’t think of the 40’s era without remembering The Andrew Sisters.  They were the most popular female singing group in the first half of the 20th Century – renowned for their tight harmonies and their mastery of the Swing and Boogie Woogie genre/s.  But there is so much more about these gals to reveal.......

Once again, Maureen O’Brien returns with another fascinating and entertaining tribute show. Joining her for this one will be Peter Farrell  on guitar, and harmonists Linda Benton and Stevi Cannon.  ....... You’ll hear many of the trio's most memorable songs such as:  Don’t Sit Under the Apple Tree,  Bei mir bist du schon, and of course Boogie Woogie Bugle Boy. You’ll hear little known anecdotes about their lives and their career.  And you’ll hear some of the novelty songs that became hits too.
This is the second season for the show which opened in February 2015 initially at The Buttai Barn with an additional show at The Dungeon.  All shows were booked out and audience response was outstanding.  This is a most enjoyable journey back in time - and a lovely way to spend a Sunday afternoon!

The women who inspired us in song

We saw a revolution in the late 60's when the rise of feminism roared - the 1970's then, was the decade where strong female songwriters came in to their own.  And they had plenty to say.  This was the decade of the woman's Anthem, the social conscience, these were the songs that influenced a generation and became a soundtrack to our lives.
Join us as we explore the lives, the stories, and the music of some of the best of the decade .... the likes of Carole King, Carly Simon, Joni Mitchell,  and many more.
4 shows:

has become an annual event at the RX Theatre on the eve of St Pat's Day.  A celebration of Irish culture featuring the Borderless project which explores the settlement of Irish women into Australia in Colonial days.      ...Mutiny… Larceny…. Anarchy…. Bigamy…. Rebellion of the  feminine kind! An extraordinary collection of women that shaped Australian culture.        This is the premise of Borderless.

Much is recorded in our history of the contribution made by the men who settled this country but the women’s contribution is, to a great extent, given little enough regard.  Can you imagine what it must have felt like to be a young woman, forcibly sent to an uncivilised, harsh colony so very different from their gentle homeland, where they had no female network, no services, severely limited facilities and supplies....leaving behind everyone they knew and loved. The strong survived and the magnificent thrived. These amazing women left a legacy to subsequent generations, characteristics that define Australian women even today.  It is estimated that almost half of the Australian population can claim Irish heritage.   Records show;

The show also includes a number of guest artists in performance.

PETTICOAT PIONEERS  explores the lives and the music of an amazing group of women in the early and pre-1920's who paved the way for the new Jazz Era.   quartet ensemble featuring: Maureen O'Brien, Gary Roberts, Russ Redford, and special guest vocalist Anousha Victoire

Imagine what it was like in that time to be black, female, and singing music that was declared to be 'devil's music'.  But these feisty, determined women, changed the face of music and paved the way for following icons - names such as Ella Fitzgerald and Billie Holliday.
If it hadn't been for the women of these times, the music of the great Robert Johnson may never have been recorded. Artists like the Stones drew inspiration from their music and subsequently changed the music in their own times. And the music is still being recorded by and influencing artists today.    An intimate presentation sharing songs and stories of a selection of  these women and culminating in a tribute to two of the Greats of the Jazz Era - Ella Fitzgerald and Etta James.   Lovers of the Classic Blues and early Jazz genre/s will thoroughly connect with this show, whilst audiences who are less familiar with this music have already proven that the music and stories are timeless, appealing to a wide audience age and taste.  Good music, after all, stands the test of time!