A CHILL IN THE AIR!

The Wireless Chronicles  is an evening at the wireless - a Live Radio Play interspersed with the music and stories of the decade.


There are 4 in the series - set in the 20s, through to the 50s.  Each episode comprises a Cast delivering the Radio Play  - The Devious Digit of Destiny – (aka the Fickle Finger of Fate) as if in a radio station, live.  Hence the episodes are ‘read’ and using props and sound effects to enhance the audience experience.
I SPY is set in the 1950s,  the era of the Cold War -  a decade which saw the birth of rock and roll, and the arrival of television in Australia.


The Players for Series 4 are;  writer/producer Maureen O’Brien; Stevi Cannon; Grant Bailey; John Dickeson; Amanda Broberg; David Benge, and guitarist/sound effects wizard Peter Sesselmann. Maureen will share a plethora of anecdotes from the era and the cast will perform a selection of the great songs from the 50s.


Devotee’s of the series will no doubt be waiting to hear the fate of the characters in the DDoD which is a wacky gangster-cum-spy farce that includes some riotous antics including a car chase... (yes! On live radio!)    .......


4 shows only and booking is recommended for those performances which include catering and can be made on 0421 072 444  OR via email:  bookings@maureen.com.au 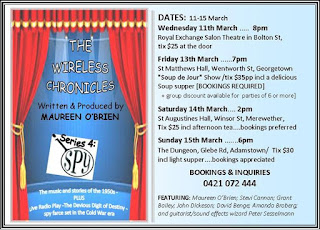 Posted by MozInOz at 2:42 AM No comments: