Well the Review's in and it's official ......THIS IS A SHOW YOU SHOULDN'T MISS!   The audiences will tell you exactly that .....the feel-good laughs and great music alone are worth the effort and the very tiny ticket price.

You can read the review HERE:   Review Upstairz Downstairz
And you can get your ticket for this weekend's show/s  here:  show tickets Posted by MozInOz at 2:19 PM No comments: 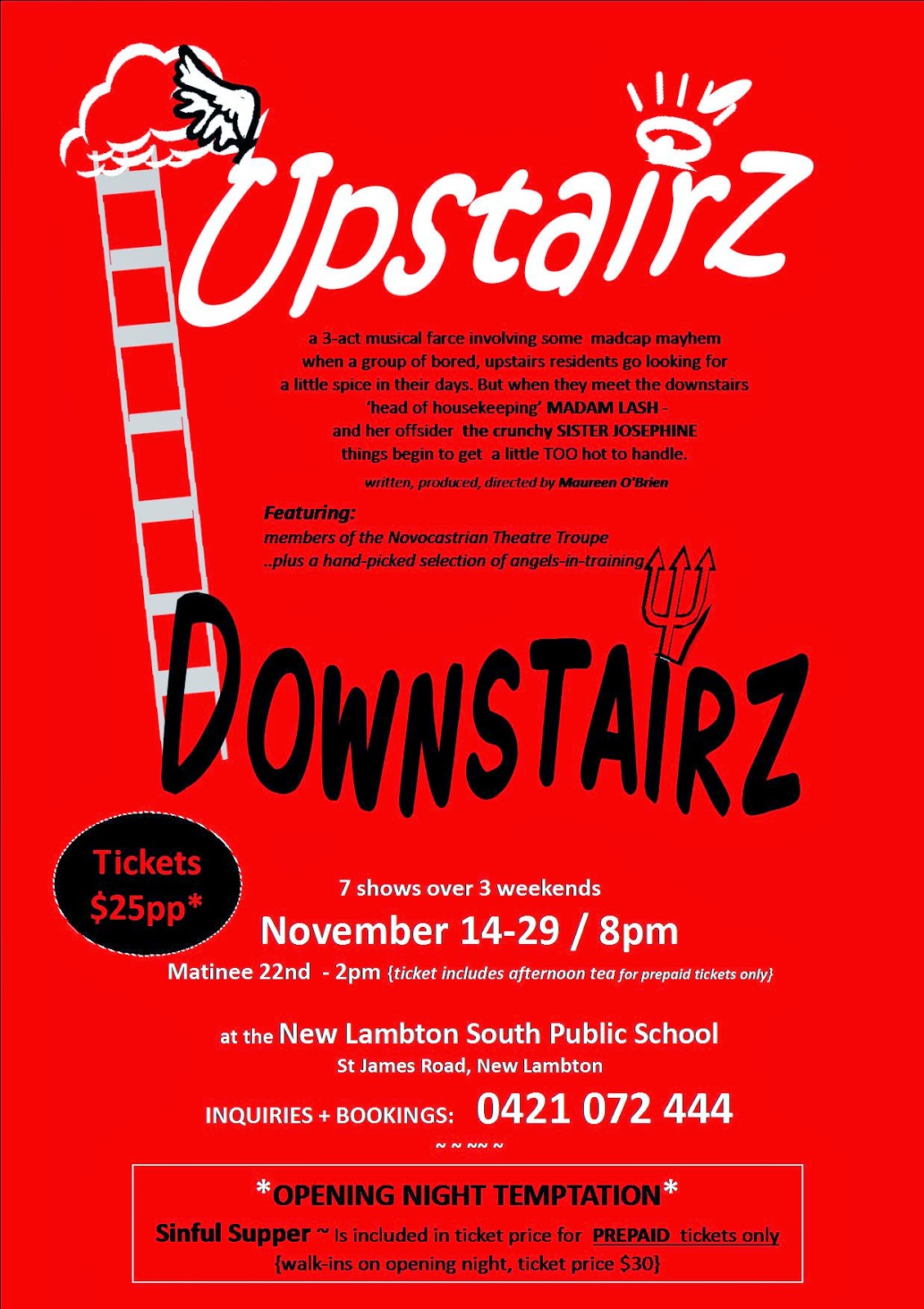 Opening November 14 for a 3 week season  UPSTAIRZ DOWNSTAIRZ Season 2 ....  Whatever you do don't miss it!  And if you were in the audience of Season 1, trust me, you won't be sorry to come back for a second bite!
This one's a big cast with a whole lot of new characters, some new scenes and a third act.  You'll meet  *The Gatekeeper   and the Man with the Horns;  Residents;  *Tilly Devine  *Slim Dusty  *Dame Nellie Melba {me me me miiii  dearie} *Lady Di  and *The Wright Brothers .....and extra's such as Squizzy Taylor along with the familiar UCEO, Madame Lash, and Sister Josephine.   Additionally,  some of the songs and many of the lines have changed.  There's a whole lot of laughs to be had and some enticing costumes and sets to please the eye [not to mention some of the characters IN those costumes!]
I'll introduce you to the Cast and some of the front and backstage folks in coming weeks - the people who work like beavers to give you a polished and entertaining experience.    Profits from this show are going to the little New Lambton South Public School - and that's where the Season will have its run.  No parking worries, no meters!
Tickets are available now - contact bookings@maureen.com.au with inquiries

BOOK TICKETS HERE NOW:  www.ticketebo.com.au/upstairzdownstairz
Posted by MozInOz at 5:25 AM No comments:

Well after a highly successful first season, I'm thrilled to announce that UPSTAIRZ DOWNSTAIRZ is now in production for a second season ...bigger and better than ever!

This production has a fun-loving cast of almost 20 and during the mid-season, I have been busily re-writing to suit a larger cast so there are quite a few new characters - and boy, are they characters!  An extra 2 scene's have been written in, a couple of songs ditched and a few new ones bought in.

So if you missed Season 1, you'd be crazy not to catch its second and last season!  If you DID manage to get to the first season, then remember how much you enjoyed the show?  Well be warned,  there's a whole lot of new laughs in store for you this time around.

More snippets will be shared in coming months - and a few piccies - here's a snap of SOME of the cast at first rehearsal.
The show opens for a 3 week season on 14th November with 7 shows including a Saturday matinee on 22nd.   AND we have a very special treat on opening night for Early Bird, pre-paid tickets.
Stay tuned and BOOK EARLY.
Dates:  14, 15, 21, 22, 28, 29 November
Venue:  New Lambton South Public School {net show proceeds donated to school}
Tix:  all tickets $25  {group discount for 20+}
Posted by MozInOz at 6:07 AM No comments: 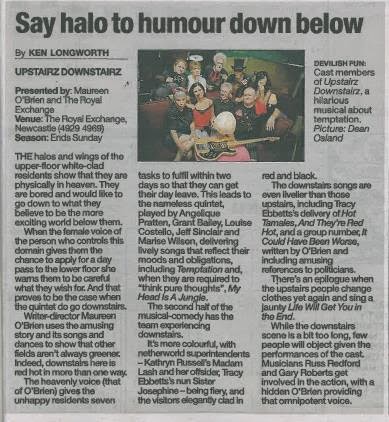 opened with a flourish on Saturday evening to a delightfully responsive audience.  A fine review published in Monday's Newcastle Herald is most satisfying.  Congratulations and thanks to a great Cast who worked hard to get it successfully launched.

For a writer, it's a most extraordinary experience to have your story come to life on stage,  to see the characters from your imagination develop a life of their own.  And, inevitably, to see a production move beyond the script and grow with its characters.

This is the real joy of community arts;  that creative artists can successfully craft something that pleases an audience;  that performers can develop their craft further to make a project believable and provide an enjoyable arts experience to others;  and that members of the community can share the fruits of their creative community and ultimately be enriched in their heart and uplifted in their spirit.
If, along the journey, one is challenged or provoked in their thoughts or attitudes, then this can only be of benefit within our community of humankind.

There are some good points made in this show - with lots of humour.  Some tickets still available for the season which ends on Sunday.  Phone the theatre on 4929 4969.

Well all the balls are up in the air and I'm juggling as fast as I can!  With a number of community chorus groups in rehearsal, plus a swag of new gigs popping up, on top of the theatre projects I'm writing/directing, it's a frantic half year.  But you wouldn't have it any other way, would you?!  The creative life force is flowing stronger than ever:

Last weekend saw the Drench and Launders show have its run and I'm pleased to report that it was a definite audience-pleaser!  It was a challenge writing a 2 hour/2woman all comedy show and it feels great to have faced the adventure and come out the other side.  Enjoyed being back on stage with the so-talented Stevi Cannon.  My brain is buzzing now with more skit and vid ideas.   Trying hard to rein it in while I complete the other projects in the pipeline.

Upstairz Downstairz is coming together beautifully - this is a wonderful cast, strong, talented, and they're nailing it!  Cast members are lamenting the fact that it's a small space production and are keen to see it move to a bigger stage.  This is something to consider for the second half of the year perhaps.  In the meantime, the script is working well, the costumes are coming together, and the laughs keep rolling! The songs chosen for this production are fitting in nicely, and the cast is delivering them beautifully with the help of some experienced musicians including Gary Roberts and Russ Redford.  Show opens April 5th at the Royal Exchange Salon Theatre in Bolton Street, Newcastle

Between the Lines begins rehearsing soon for its May season.  This production has been commissioned for some performances to open the new Cardiff Library by Lake Macquarie Council and the challenge will be to make it work in an actual library setting.  2 Cast members have been replaced and I'm excited to be working with 2 troupers from the Novocastrian Players.  {I also swiped a few of their troupe for Upstairz Downstairz but shhhhh don't blab!}  I'm also planning to add in an additional matinee in a new venue [for us] during the season.  Details are on the Between the Lines page.

Crazy: the life and music of Patsy Cline  this show has been commissioned for the Buttai Barn in May and is likely to also run in Newcastle in following months.   Patsy Cline was the most influential female country artist of her time and her music is still popular - continuing to influence young country artists - today.
Posted by MozInOz at 3:25 AM No comments:

Winding Up for a big year

Happy New Year!  2013 was such a blast and 2014 is shaping up even bigger.  I'm already head down tail up in preparations for:
My chorus groups are all champing at the bit to get back into the swing of sing and I have a whole swag of new material for them.
There's no doubt that MUSIC is the great panacea ... it uplifts and enthuses you beyond the scope of any illicit drugs;  soothes and restores you without the requirement of addictive, prescription drugs;  comforts you when you're feeling down;  and when you're doing it with other people you're never lonely or alone;   If you haven't checked out the SingOz page, take a look now; Sing Oz
No wonder it's true when they say "Music is vital for physical, mental and emotional well-being".
Posted by MozInOz at 12:31 AM No comments: